CONGRATULATIONS TO California branches  donating $471,581 to AAUW Fund in 2018!
Danville-Alamo-Walnut Creek branch was number one in the USA donating $32,207.

Thank you and congratulations to the members of AAUW California for your generous donations. 2016 was a record breaking year. Our endowment is heading toward completion. Do remember #4391 Danville-Alamo-Walnut Creek 45th Anniversary Research now has an accumulated $82,442.16. We need $117,557.84 to complete the endowment.

Thanks all members who made an individual donation in 2014.
Carol Kennedy, Funds VP

Again a reminder that our 80+ members who made individual tax-deductible donations to the fund of their choice will be recognized at our June meeting. Thanks to all of you.

Remember our commitment to AAUW Funds is the backbone of our organization enabling more women to break barriers, achieve equality and make a real difference in today’s world. You are encouraged to designate your donation to the Danville-Alamo-Walnut Creek Branch 45th Anniversary Fellowship (Educational Opportunities) #4391. Look for your fundraising letter with full details in the mail.  Click here to donate online now. 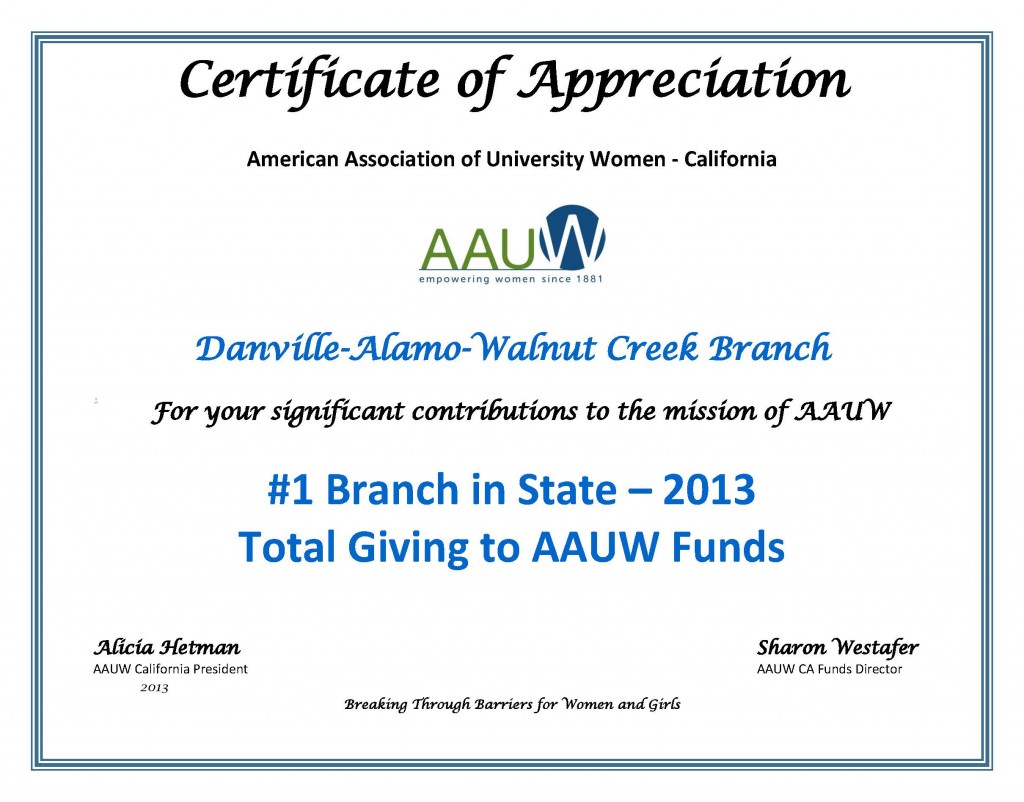 (April 2014)  Our Branch was announced as #1 in California for contributions to AAUW Funds in 2013! At our upcoming Installation and Recognitions meeting on May 29th @ 5:30 pm at Round Hill CC, many of our donors will be honored for their significant contribution to AAUW funds. Please attend & enjoy complimentary appetizers and beverages with other branch members. RSVP today!

P.S. We are beginning an American Fellowship in honor Danville-Alamo-Walnut Creek Branch 45thPlease consider a donation to this fund in 2014. Thanks.

(December 2013) A big thank you to the 60 members – 24% of the branch – who made special individual donations to AAUW Funds in 2013. Along with our successful Garden Tour fundraiser last May, we have sent an amazing $40,500 to Association this year. Our Branch truly believes it is important to help women who strive to a make a difference in today’s world!

Please join us in February for our program featuring our AAUW Fund Recipient speaker, Mamie Chow.

(December 2013) Since 1888 AAUW has funded women’s graduate education, investing in women who go on to change the world. By 2013, AAUW has awarded nearly $100 million in fellowships, grants and awards to more than 12,000 women from over 130 countries. In this video, you will learn about the influence alumnae and AAUW members have had all over the world through the 125-year-old fellowships and grants program. Join us in celebrating AAUW’s rich history by sharing this video with your networks and AAUW community.

(June 2013) As 2012-2013 Vice President of AAUW Funds, it is my pleasure to announce that in 2012 the Danville-Alamo-Walnut Creek AAUW branch gave a total of $42,020 to AAUW Funds. We were ranked second in California in Funds gifts and third in the state in Per Capita Funds gifts.

In addition, in May 2013, our branch completed the $75,000 Tena Gallagher R&P Grant (Fund #4353) which will give fellowships in Research and Projects to many women. Other completed endowments honoring our branch include four in the branch name only, Research and Projects grants honoring Connie Cady, Joan Harberson, Rita Wustner, and Tena Gallagher, an American Fellowship honoring Chris Winter, and an International Fellowship honoring Joan Harberson.

Special praise goes to Mary Holzheimer and Kathy McKnight for the 2012-2013 outstanding garden tour. Because of their hard work, funds were generated which we were then able to contribute to AAUW Funds.  Many thanks go to Linda Reeve for donating the drawing prizes and kudos go to all of our members who worked as docents and did special baking for the tour. This May, our branch donated toward the 2013 year total of $21,020 to AAUW Funds as follows: $7020 toward the Tena Gallagher R&P Grant (Fund #43563), and $3,000 each to  Leadership, and Public Policy Funds, and $8,000. to Legal Advocacy. In addition, special thanks to all our members who sent in donations to association and credited our branch.

California AAUW honors the following women who have donated funds, time, and efforts to AAUW Funds.

Please give generously to our Funds.  Don’t forget to credit the Danville-Alamo-Walnut Creek Branch when you are making your donations.